Don Carlos lives in Naranjo at 1200 meters above sea level. He is a coffee farmer through and through. He loves coffee more than anything else, and he especially likes his own coffee. So it is not easy for Don Carlos to taste a foreign coffee without criticizing it… Don Carlos is very proud of his own coffee and waits eagerly every year for the classification of his “golden grain”. His ancestors were already involved in coffee cultivation and there is really nothing that Don Carlos cannot answer about coffee. If you visit the friendly Carlos as part of a coffee tour, you should definitely try bananas from his garden: It doesn’t get any sweeter than that!

In the slideshow, you can find out how Don Carlos makes his natural plant protection product. The busy farming family lives in the province of Alajuela, in Palmares, at 1200 m.a.s.l. In addition to coffee, Honorio and his wife Carmen also produce cocoa, cane sugar and bananas, all nestled in a natural forest. Convinced that chemicals are harmful to health and the environment, they have long practiced exclusively organic farming. Their three adult children, Loreth, Paulina and Marcelo, help their parents run the business.

Lucidia, Minor and Ruth are at home in the most famous coffee growing area of Costa Rica. They live in San Marcos de Tarrazú, at 1800 meters above sea level. They have been convinced of organic cultivation for a long time and practice it with heart and soul. They cultivate a variety of different organic fruits and vegetables in their garden. Coffee grows surrounded by cacao, bananas, avocado, corn and herbs of all kinds in the midst of a natural mixed culture. The two passionate “coffee lovers” put a lot of love into their coffee and are very proud of it. When you arrive at their place, you are immediately warmly welcomed with a heavenly smelling coffee. Guests can grind their own coffee with the traditional hand grinder and just pour it themselves in the traditional chorreador. Support this lovely family by drinking their coffee or visiting them on site. 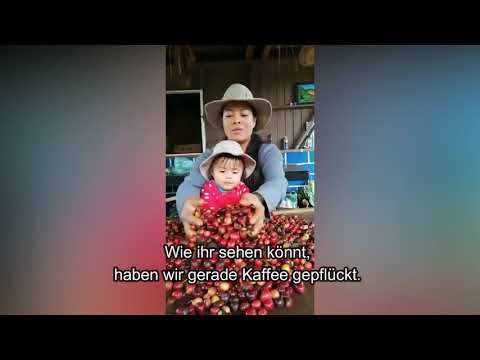 The home of Jonathan Cerdas and Carlos Marin is the well-known coffee region of Tarrazú, also known as “Zona de los Santos”. Since an early age, they have observed that the natural forests are increasingly being cut down and coffee plantations in the form of monocultures are taking their place. The soils are increasingly depleted by over-fertilization and nature is suffering greatly.

The two no longer wanted to stand idly by and watch the destruction of their region by conventional coffee cultivation. They wanted nature and biodiversity back! And so their project was born: Since 2009, they have been helping local farmers to convert from conventional cultivation (cultivation with chemical fertilizers and herbicides) to natural cultivation with naturally, organically produced pesticides and fertilizers. They depend on volunteers to do this! Volunteers who help the farmers to bear the extra costs. Thanks to this ingenious idea of Jonathan and Carlos, many motivated people have already worked in the fields and 11 farms have become “pure nature farms”! For Jonathan and Carlos sustainability is a matter of course. Their goal is to reclaim lost ecosystems by re-establishing natural biodiversity and mixed cropping and using only natural pesticides. Let’s plant!

If you want more farming families to join the project and protect the environment, then support the project and drink coffee from these heroes. Or would you like to help on the coffee plantations yourself and learn all about organic farming? Sign up for a volunteer project.

Not registered yet? Register